Five in a Row: Pumpkin Runner 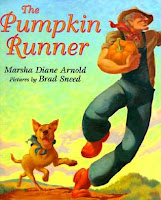 October is always a crazy month for our family with three family birthdays spread out over the month. Most years, school falls apart this month, but I'm glad to say that we actually were able to mostly stay on track. Well, math may have been a little neglected, but we had some good learning experiences, so I'm glad. Part of staying sane also meant taking a week off while my husband was in California on business and the weather was in the 70s. I feel like we actually got to enjoy Fall. Good thing because it snowed the next week.

We started the month off with a book we had not yet read, The Pumpkin Runner by Marsha Diane Arnold. The lessons for this book are in Volume 4 of Five in a Row. Volume 4 is intended for use with slightly older kids, so the lessons stretch over two weeks. We loved this book about an Australian sheep farmer named Joshua Summerhayes who decides to enter an ultra-marathon race from Melbourne to Sydney. He shows up in gumboots and overalls and eats pumpkins for energy food. The other runners laugh at him and even try to cheat, but Joshua Summerhayes wins the race and ends up splitting the prize money with the other runners. The coolest thing about this book is that it's based on a true story about a man named Cliff Young, who was a 61-year-old farmer in Australia who broke the world record in an ultra-marathon race by almost two days. 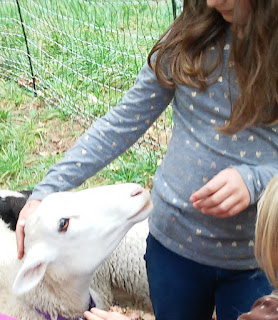 We started off our week by visiting our friends for a fun day to celebrate Fall. We really wanted to meet their two new sheep on their farm. My friend had planned some fun events like scavenger hunts, poetry and apples with caramel. Unfortunately, in the middle of the day, she started feeling very sick and exhausted, so I took over. 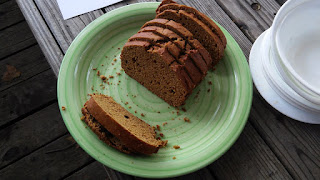 We shared the pumpkin bread Ella had made for a snack, and read them the book Pumpkin Runner. I've never seen a group of kids so enthusiastic about a picture book. They had so many questions about sheep and running and Australia. Being from a farming family, they loved that it was based on a true story about a farmer. Afterward, they immediately decided, "Let's have races!" So we did: one where they had to shuffle along like Joshua Summerhayes/ Cliff Young and one where they were actually running. 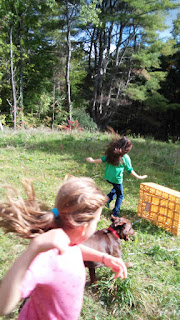 After our fun day with our friends, we spent the next day learning about pumpkins for science. We used another Mystery Science lesson: How could you make the biggest fruit in the world?  The lesson was about selecting for growing bigger vegetables, and had a fun activity about sorting and grouping fruits and vegetables by their leaves, flowers, and the appearance of the fruit inside. The kids have big plans to grow a giant pumpkin, once we have the space. 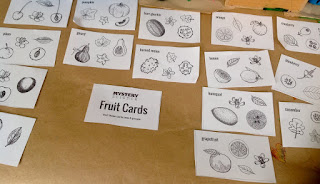 We also made a collage of our favorite pumpkins and gourds from the Baker Creek Rare Seeds catalog. Bonus: we learned about Jere Gettle, the founder of Baker Creek seeds, who was a homeschooler, who loved to garden and save seeds. He started his company when he was just 17. 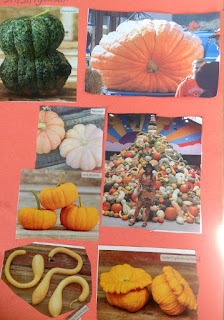 Thursday was our day for poetry tea. We had pumpkin spice tea. A friend of mine had told me about a treat they have in Australia called Fairy Bread, which is bread with butter and sprinkles.We are very pro-sprinkles in our house, so we had to try it. Very yummy! 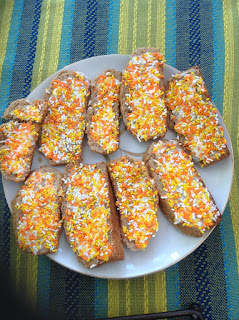 Since we were having  Fairy Bread, the kids thought they should dress up a bit. 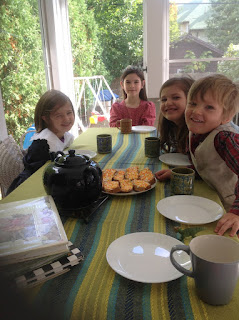 We read from a favorite poetry book: The Complete Book of Flower Fairies by Cicely Mary Barker. The book features beautiful illustrations of fairies. Each one is based on a different flower, plant, or bush. They each have a poem to go with them. There are books of Flower Fairies for each season, so we read the Autumn fairies. 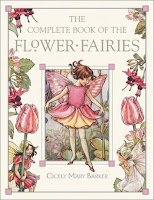 On Saturday, we went apple-picking for my husband's birthday, and guess what we found? A pumpkin patch! 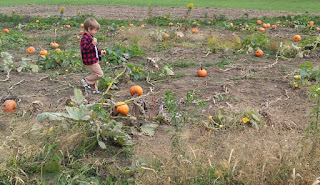 This book was a great opportunity to learn about a new continent for us: Australia. We looked up Australia on the globe and also found the Equator, Prime Meridian, and Tropics of Cancer and Capricorn. We discussed the fact that the seasons were opposite in Australia, and read several non-fiction books about Australia, Australian animals, and the Coral Reef from the library. We also read about Cliff Young, and watched news videos about him.

For our second science lesson, we learned about the muscles and bones in your body and how they work. We used another Mystery Science lesson called Why do your biceps bulge? The kids were fascinated when the video showed the teacher pulling the tendons on a chicken foot. We really enjoyed the activity, which included making a paper model of a robotic finger. With string and paper clips, the finger would actually move when you pulled on the string. 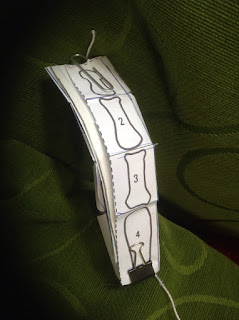 The art lesson for the week was on perspective and how a painting can change depending on your point of your point of view. So we went on a walk.One of my sadnesses in not being able to sell our house this summer, is that the kids really want trees, especially trees they can climb. We don't have any trees, except a maple by the street in front of our house with no low branches. A few streets over from our house there is an avenue with a long tree belt in the middle. We often have walked there to pick up pretty leaves in Fall. This year, we discovered that it was just packed with good climbing trees. Each kid has picked out a favorite tree, and it's our new favorite playground. So we decided to get a new perspective on our art. We brought along our nature journals and we drew in the trees. 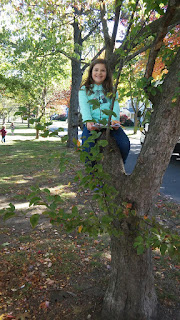 I also snapped some photos to show how you can draw a picture that looks more 3-D by making the trees near you large and the trees farther away smaller. The Five in a Row manual had a lesson on this using toys, which we did using our Star Wars figures. This led to Mabel's masterpiece: Wookies in Perspective. 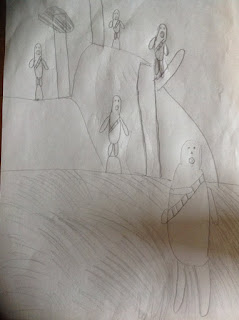 LeAnna
I write to you from rural New England where I live with my husband, four children, elderly yellow lab, two kune-kune pigs, two barn cats, and thousands of books. I am a reader, a writer, a Christian, and a homeschool educator at The School of Good Books. Like a classic children's book, our lives are full of lovely moments, good stories, and humorous pitfalls and escapades, which I hope to share with you on this blog.